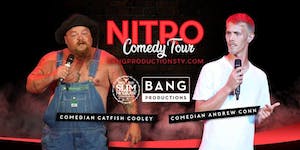 Comedian Catfish Cooley brings high energy comedy to his southern following with a punch. Don’t judge a book by it’s cover — he’s not just a guy drinking hot sauce and chugging whiskey, he’s a real storyteller with a positive message. You may recognize him from when he was featured on Tosh.O. He's been compared to Larry the Cable Guy and the happiest redneck SOB you ever did meet!

Comedian Andrew Conn, a Kentucky native, recently started dominating the stage with his playful personality and comical facial expressions. Conn experienced a defining moment in his career when the Nitro Comedy Tour sold out the Hard Rock Casino with 2,500 people in Tulsa, OK. The crowd quickly recognized him as a rising super star in comedy who resembles that of a redneck Jim Carrey. When Andrew isn’t busy sharing his offbeat, true-life experiences center stage, he’s sharing his comedic journey through unfiltered videos that are sure to make you laugh. Keep an eye out for Andrew Conn because he’s the next big star in comedy.

Dee Jay Slim McGraw bred on music that’s slow roasted and deep fried like his Southern roots! Slim McGraw has opened for Brett Eldredge, Lee Brice, Randy Houser, Dylan Scott, and shared the stage with The Chainsmokers, Calvin Harris, Nelly, Flo Rida among others. When in Nashville you can find him on Broadway playing at Jason Aldean’s Rooftop Bar, Luke Bryan’s 32 Bridge and Florida Georgia Line’s FGL House. Back home in Charlotte, the non-stop DJ is a resident at Whisky River owned by NASCAR legend Dale Earnhardt, Jr. He recently was honored to perform at Dale Jr’s retirement party with Kid Rock, Cole Swindell & Billy Currington.

No images found!
Try some other hashtag or username